When I first met Sally Armstrong I knew instantly that my life would never be the same. When she spoke, my perspectives were challenged and my worldview shifted. What I thought I knew about women, men, culture and world religion went out the window and I realized how the power of a voice can change the world.

My producer was almost in tears when the show was over because he had never heard about some of the things we talked about and others he thought were no longer in practice. Sally challenges us to walk in the world with our eyes, minds and hearts open. I challenge you to look at your life, after you listen to the show and tell me, and the world where you have been silent in your life and how you are now going to use your voice. I am on twitter @TheLauraSteward and Sally is @SallyArmstrong9 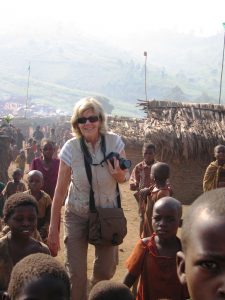 Human rights activist, journalist and award-winning author Sally Armstrong has covered stories about women and girls in zones of conflict all over the world. From Bosnia and Somalia to the Middle East, Rwanda, Congo and Afghanistan, her eye witness reports have earned her awards including the Gold Award from the National Magazine Awards Foundation and the Author’s Award from the Foundation for the Advancement of Canadian Letters. She received the Amnesty International Media Award in 2000, 2002 and again in 2011.

She was a member of the International Women’s Commission a UN body that consists of 20 Palestinian women, 20 Israeli women and 12 internationals whose mandate is assisting with the path to peace in the Middle East.

In 1996, Sally was honoured by the YWCA of Toronto with the prestigious Women of Distinction Award in Communications. In 1997 she received the Achievement Award for Human Rights for Women from Jewish Women International; in 1998 Media Watch’s Dodi Robb Award and in 2003, the Foundation Award for Outstanding Achievement from the National Magazine Awards Foundation.  In 2005, she received the Athena International Award (Chicago), the World of Difference Award from the International Alliance for Women (Florida) and the Red Cross Humanitarian Award – New Brunswick Region. In 2008 she received the Clarkson Laureate for public service at Massey College, University of Toronto. And in May 2008, she received the Lifetime Achievement Award from the Canadian Journalism Foundation. In March 2010, she became the fourth recipient of The Calgary Peace Prize.

She is the recipient of eight honorary doctorate degrees and is a Member of the Order of Canada.