Well there are a few more steps in-between the title of this episode. I had to bring back my guest Brandon Webb because his latest book, two in just a few months, is to important to not be talked about. Reading my advance copy of Total Focus: How to Make Better Decisions Under Pressure shifted me out of lethargy faster than anything I have read in a long time. Maybe it was timing. This show, and my guests are the best kind of therapy. Each week my perspective gets shifted, last week’s show with Wayne Pernell prepared me for the impact of this one. Hopefully you have had a chance to listen to it and many of the others. They build, they shift and most of all, according to you, my listeners, make thinking happen.

Seven principles laid out, each more powerful than the last. Why powerful? Their simplicity. Not that they are always simple to implement but simplicity in the Why? And you know I love the Why? question!

Integrity, authenticity and most of all a driving need to share his experience to help others learn and grow is why Brandon is back on the show with an open invite anytime. So let’s go into some things we cover on this show:

At the end of the day, it is the choices we make that define who we become. Let me know what choices you are making after you listen to this episode. Find me on Twitter @thelaurasteward 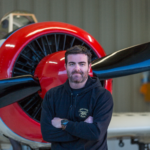 After leaving home at age sixteen Brandon finished high school, and joined the US Navy to become a Navy SEAL.  His first permanent assignment was as a helicopter Aircrew Search & Rescue (SAR) swimmer and Aviation Warfare Systems Operator with HS-6. In 1997 his Basic Underwater Demolition/SEAL (BUD/S) package was approved. He would class up with over 200 students in BUD/S class 215, and go on to complete the training as 1 of 23 originals.

An accomplished and proven leader, Brandon was meritoriously promoted to E-6 while serving as an advanced sniper instructor at NSWG-1, and was recommended and promoted to the rank of Chief Petty Officer (E-7) his first time eligible while at the sniper course. He has received numerous distinguished service awards including the Presidential Unit Citation (personally awarded to him by President George W. Bush), and the Navy and Marine Corps Commendation medal with “V” device for valor in combat. Webb ended his Navy career early after over a decade of service in order to spend more time with his children and focus on entrepreneurship (both his parents were small business owners).

Brandon is regularly featured in the media as a military and business subject matter expert. He has contributed to ABC’s Good Morning America, NBC’s Today Show, FOX news, CNN, the BBC, SIRIUS XM, MSNBC, and The New York Times.

Webb is a New York Times bestselling author. His books include, The Red Circle (St. Martin’s Press) Among Heroes (Penguin-Random House),  Benghazi, The Definitive Report (Harper Collins), The ISIS Solution (SOFREP books), and The Power of Thought (self-published). He has two books scheduled to publish in 2017. The Killing School: Inside the World’s deadliest sniper program, is set to publish with St. Martin’s Press May, 2017. Total Focus: How to Make Better Decisions Under Pressure, publishes with Penguin Random House in the August, 2017.

In 2012, after losing his best friend, Navy SEAL & CIA contractor Glen Doherty, in Benghazi, Libya, he founded The Red Circle Foundation (RCF), a non-profit with a 100% pass through model; every dollar donated goes to the mission and business partner donors pick up the Foundation’s overhead. RCF is focused on supporting families of the Special Operations community through emergency memorial, medical, and child enrichment programs (camps & scholarships).

Brandon is an active member of the Entrepreneurs Organization New York (EONY), and enjoys spending time with his tight circle of amazing family & friends, being outdoors, and flying his experimental aircraft upside-down. He splits his time between his residence in San Juan, PR and Manhattan, NY.