The power of being in the now is real but goals require future thinking too. How do you bridge the two? How do you plan and be in the moment? How do you set a big goal and then step back AND keep the big picture in mind?

My guests today are two of my most popular guests so I brought them back on the show, together for the first time, to discuss focus, being present, setting goals and preparing for the new year.

Swami Durga Das and Swami Anjani ask us to ask ourselves one really big question as we end the year and begin the new one. If you want to know what that question is that will change the way you think of, well, everything, you will have to listen in. It is an age old question that I am still working through. I think I know the answer yet I am uncertain. It has taken on new meaning since my mom passed away.

When you find the answer to the question for yourself, let me know so I can hold that space for you!

Swami Durga Das Hutner is the CEO of Kashi Ashram, an interfaith intentional community founded in 1976, more than 40 years ago.

Durga Das had begun studying Martial Arts in 1980; after many years of practice, he earned a 5th Dan Master’s degree in Tae Kwon Do and trained for the 1988 Olympic Games. He was the Florida State Champion in fighting from 1986 through 1988.

Throughout this time Durga Das continued to be an integral part of the Kashi community. In 1996, he was ordained by Ma Jaya as a Swami (selfless servant to humanity).  In that capacity, he began formally teaching and mentoring younger generations about mindful meditation and service to others. He later was bestowed the title Acharya, which means one who shares spiritual teachings.

From 1998 through 2010 he helped to develop Kashi’s real estate in a healthy eco-friendly method. He continues to work to foster healthy, sustainable living. He currently serves as the CEO of Kashi Foundation and works locally with agencies to serve those in need. He is also a member of the steering committee of Indian River County Needs Assessment in conjunction with the Senior Resource Association.

Swami Durga Das believes in nurturing a healthy mind and body, and as a trained Kali Natha Yogi, he continues to do yoga regularly. As a holdover from his youthful days in Philadelphia, Durga Das is a devoted Flyers fan and is himself an avid ice hockey player. He and his wife, Saraswati Rose, are raising their daughters, Mira Jaya and Kali Devi, on the sacred grounds of Kashi. 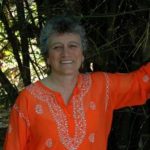 Swami Anjani graduated from Brockport State University (New York) in 1967 with a degree in Secondary English Education.  She joined the Peace Corps and served in the Philippines until 1969, training teachers and directing a program for kids suffering from leprosy.

Swami Anjani met Ma Jaya in New York in 1975; she moved to Kashi in 1979, serving as the River School’s Principal for 24 years. Swami attended the Harvard Graduate School’s Principal’s Center in 1995. She helped organize the Treasure Coast Teen Institute, a youth leadership camp. In ’02, the Congressional Youth Leadership Council in Washington recognized her for her contributions as an advisor.

She currently serves as Kashi’s Director of Community Relations and is Kashi’s representative to the United Religions Initiative. From 2003  – 2012, Swami Anjani served on the Board of Directors of the Economic Opportunities Council and as a member of the Sebastian Advisory Council of the Boys & Girls Club. She has served as  the President of the Sebastian Clambake Foundation since 2006, was elected Sebastian’s Woman of the Year in 2009, and was chosen by the Lion’s Club as the Grand Marshal of the 2014 July 4th Parade.

Since 2010 she has spoken several times at Unity/Ft. Lauderdale during their September Interfaith Month services. In October, 2015, she represented Kashi at the Parliament of the World’s Religions in Salt Lake City. Swami Anjani has spoken at Interfaith services in Vero and Sebastian, and she serves as a volunteer Interfaith Chaplain at Indian River Medical Center.