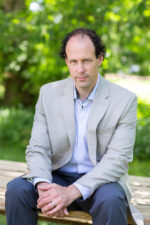 They say you should write what you know. Sometimes that creates a boring book but in the hands of a master like Brad Parks it creates a book that you want to devour in one sitting. Or in my case one flight to Omaha with a layover in Atlanta.

We also get into a conversation about how the organization at the center of his Closer Than You Know can be fixed. I did not get him to break into song so I will have to have him back on the show!

Brad Parks is the only author to have won the Shamus, Nero and Lefty Awards, three of crime fiction’s most prestigious prizes. His first standalone thriller, Say Nothing, released March 2017 from Dutton Books in the U.S., along with thirteen other publishers worldwide.

Parks’s six previous novels chart the adventures of sometimes-dashing investigative newspaper reporter Carter Ross, and have collectively won stars from every major pre-publication review outlet. A graduate of Dartmouth College, Parks is a former journalist with The Washington Post and The(Newark, N.J.) Star-Ledger. He is now a full-time novelist living in Virginia with his wife and two school-aged children.