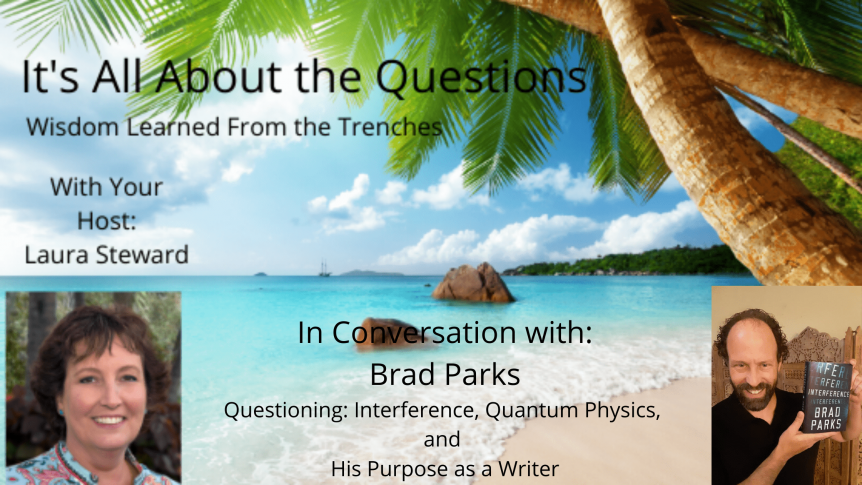 On the launch day for his new book, Interference, Brad Parks shares his love of physics and writing and how he weaves facts so his fiction reads more like reality. We had a laugh filled conversation filled with non-spoiler moments if you have not read his book yet.

I don’t often interview fiction writers but I always say yes when Brad is launching a new book. This one is especially intriguing to me as a science geek. Brad’s multi-layered plot lines, and characters that have depth to them, always keeps me rooted in place until I finish the book.

On this interview Brad and I talk about how his life and neighbors inspire his plots, what it takes to keep his characters true to themselves and why you will never see a curse word in any of his novels. I especially enjoyed the conversation about one curse word he cannot find a replacement for in writing but still does not use.

His words at the end of the interview on his purpose in life are words I think I shall always carry with me.

International bestselling author Brad Parks is the only writer to have won the Shamus, Nero, and Lefty Awards, three of American crime fiction’s most prestigious prizes. His novels have been translated into 15 languages and have won critical acclaim across the globe, including stars from every major pre-publication review outlet.

A graduate of Dartmouth College, Parks is a former journalist with The Washington Post and The (Newark, N.J.) Star-Ledger. He is now a full-time novelist living in Virginia with his wife and two school-aged children.

Read along while you listen or just read the transcript!