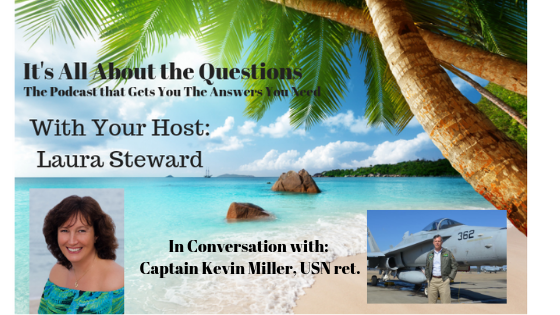 The movie Top Gun has fascinated millions of people around the world so much so that a sequel is finally being planned. Movies about U.S. Navy Fighter Pilots regularly hit top box office numbers. What is it about Navy fighter pilots that piques our interest? What is it that has us wondering how they do what they do and how we can get some of their confidence for ourselves?

I’ve seen the Blue Angels perform multiple times and each time is like the first. My heart starts racing and I am in awe of the focus and dedication the pilots have. Yet, when asked where they would rather be, each pilot will always say they look forward to going back to their ship and protecting our country.

My guest today retired as a Captain in the U.S. Navy after 1000 FA-18 Hornet day and night takeoffs and landing on aircraft carriers. There are very few people in this world that have achieved that milestone. After 24 years in the military Kevin Miller still is involved as a defense consultant and corporate trainer on continuous improvement plus he is an international bestselling author.

On my January 29th episode I got to ask him questions I never get to ask someone about what it is really like to be a fighter pilot, how one transitions from a life of high adrenaline and constant alertness to a civilian life, how it was different working as a legislative liaison versus active duty as a fighter pilot and our current geopolitical environment especially in the South China Sea. We also talk about the continuous improvement process used in the military and how you can apply it to your business and your life. 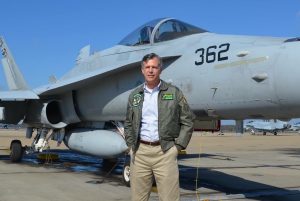 Retired Navy Captain Kevin Miller graduated from the University of Mississippi and was designated a Naval Aviator in August 1983. He flew the A-7E Corsair II and FA-18C Hornet throughout the 1980’s and 90’s and commanded a strike-fighter squadron in combat. He finished his career in the Pentagon serving on the staff of the Secretary of the Navy, retiring in 2005 after 24 years. During his military career he accumulated over 3,600 flight hours and 1,000 carrier landings from the decks of 11 aircraft carriers. His personal decorations include the Bronze Star, the Air Medal (with combat “V”), and two strike-flight Air Medals.

After leaving the service Kevin was employed as an associate at two Washington DC defense consulting firms, and today is the Owner/Principal of MPK Defense Consulting. He is also the Amazon Best-Selling author of the military action-adventure novels Raven One, Declared Hostile, and his latest, Fight Fight.

Kevin earned a Master of Science in Business Management from Florida State University and a Master of National Security Policy and Strategic Studies from the Naval War College. In 2010 he joined the Naval Aviation Museum Foundation as Executive Vice President and Chief Operating Officer and was instrumental in the launch of the National Flight Academy.

Kevin is active in St. Paul Catholic Church, is on the board of the Pensacola Chapter of the Navy League, serves as an Executive Mentor at the University of West Florida, and serves as Vice President of Legislative Affairs for the Tailhook Association. He is working on his next novel.